- January 20, 2023 No comments:
Email ThisBlogThis!Share to TwitterShare to FacebookShare to Pinterest

JUST A Number is the latest single from Grammy Award-winning reggae band Morgan Heritage. "Just A Number was inspired by historic and current figures in the entertainment industry. The song speaks directly to the upcoming sports, film, TV, and music entertainers and anyone pursuing a professional career. We want to make them aware that they should not work hard and sacrifice all their lives to build a career and potentially lose everything overnight because of their personal views or opinion. As students of history, we learned about brutal figures, and we'd like to sdiv class="separator" style="clear: both;"> 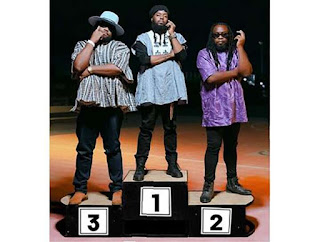 tart a conversation about today's newsmakers and ensure the youths don't make the same mistakes," said Morgan Heritage, which comprises Peetah Morgan, Gramps Morgan, and Mojo Morgan. Produced by Kareem "Remus" Burrell, the song, and its accompanying video are slated to be released today on the XTM.Nation label. "Morgan Heritage and the XTM family have always had a connection. My dad, Philip "Fatis" Burrell, produced tracks for Morgan Heritage as well as their younger siblings, LMS. I'm privileged to have produced this track Just A Number and I am really excited for its release," said Burrell. "Just A Number is an awareness anthem which sparks the conversation around a much-needed topic surrounding the unfortunate reality of how one can jeopardise their legacy or financial accomplishments one has worked so hard to achieve because of their personal views or opinions." According to the producer, Just A Number is the first single on the Special Request Riddim slated for release at the end of February. Heralded as the Royal Family of Reggae, the band has released 12 studio albums including Strictly Roots, which won at the 58th annual Grammy Awards for Best Reggae Album. With a career spanning two decades and over, Morgan Heritage has worked with numerous multi-Grammy award-winning artistes and producers across multiple genres of music.
- January 07, 2023 No comments:
Email ThisBlogThis!Share to TwitterShare to FacebookShare to Pinterest
Home
Subscribe to: Posts (Atom)